By patiencelewis
In Latest News
0
0

Home construction off to strong start 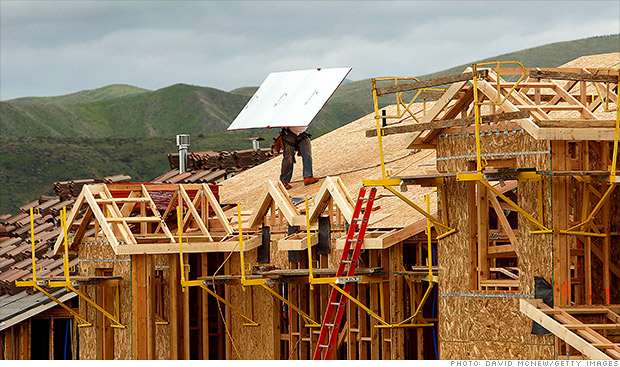 Builders filed the the most building permits since early 2008 in January.
NEW YORK (CNNMoney)

Home construction got off to a strong start in 2013, as builders filed for the greatest number of permits in more than four years in January

Permits are a sign of builders’ confidence in the market. It’s also less affected by weather than housing starts. Last month, builders filed for permits at an annual rate of 925,000, up about 2% from December and up 35% from a year earlier. It was the best month for permits since June 2008.

Meanwhile, the pace of housing starts slowed to an annual rate of 890,000 in January, down 9% from December, when there was a spike related to repairs from Superstorm Sandy. But even the lower pace of starts was up 24% from a year ago.

The housing market has been helped by a number of factors in recent months, including increased sales of both new homes and previously-owned houses, adrop in foreclosures, and near record low mortgage rates. A drop in the nation’sunemployment rate is also helping.

The rebound in housing is good news for builders, such as PulteGroup (PHM), KB Home(KBH), D.R. Horton (DHI) and Toll Brothers (TOL), whose shares are all outpacing gains in the broader markets so far this year. But all were down in early premarket trading Wednesday ahead of the government report because Toll Brothers reported financial results that missed forecasts.

The rebound in home sales, prices and construction are all positives for the broader economy. Economists believe this is the year that housing could help lead the way on overall economic growth.