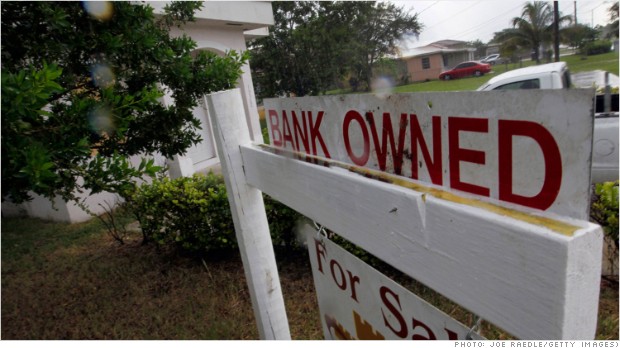 Sales of bank-owned properties last quarter hit their lowest level since early 2008, according to a new report.

There were 101,371 distressed sales during the first quarter of 2013, RealtyTrac said Thursday. That accounted for 21% of the total market, down from 25% a year earlier.

The most striking trend in distressed property sales now is the decline in short sales, according to RealtyTrac spokesman Daren Blomquist. These are deals on homes that are worth less than what sellers owe to the bank. Banks okay the sales to prevent the home from going through the costly foreclosure process, and forgive the unpaid debts. Nationally, short sales fell 35% in the first quarter, compared with 12 months earlier.

“The decrease in short sales was a bit of surprise given that 11 million homeowners nationwide still owe more on their homes than they’re worth,” said Blomquist. “Rising home prices are taking away the incentive for short sales on the part of both homeowners and lenders.”

As home prices rise, underwater borrowers are tempted to hold onto their properties with the hope of selling at the price they paid. That way, they won’t take a big hit to their credit score for failing to fully repay their loans.

Lenders are also less inclined to approve short sales, because even the prices of bank-owned houses are going up. The average foreclosure price rose 28% during the first three months of 2013, and that’s given lenders more leeway to deny low-ball short sales.

If a short sale doesn’t work out, the banks aren’t necessarily going to lose more money on a foreclosure, Blomquist explained.

On the other hand, distressed sales made up less than 7% of the market in the District of Columbia, Massachusetts and New York.

Distressed property sales will continue to shrink as fewer homeowners fall behind on their mortgages. Lenders repossessed fewer than 35,000 homes in April, a third of the number of foreclosures repossessed during September 2010.