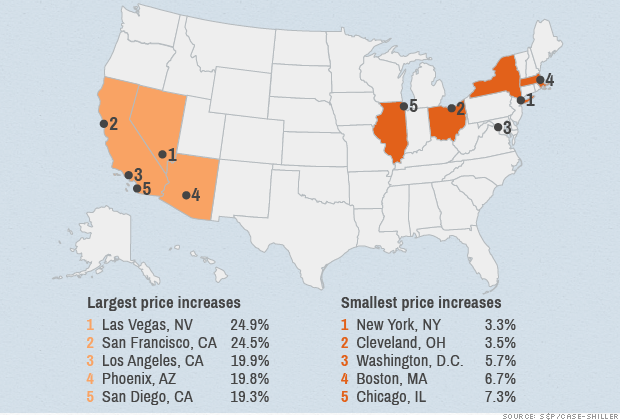 Home prices are still surging, but the pace of the gains has steadied as interest rates continue to rise.

Prices for homes in the nation’s 20 largest cities in June rose 12.1% over the last year, according to a report Tuesday from S&P/Case-Shiller home price index.

While that gain is still robust, it didn’t quite match the gain of 12.2% reported for May. Rising mortgage rates may be to blame.

“With interest rates rising to almost 4.6%, home buyers may be discouraged and sharp increases may be dampened,” David Blitzer, chairman of the Index Committee at S&P Dow Jones Indices, said in a press release.

Prices in Dallas and Denver hit all-time highs, while San Francisco housing prices notched the biggest rebound, rising 47% from their low in March 2009.

And while mortgage rates have been steadily rising for the last few months, they’re still at historically low levels.

Record-low rates, a lack of new homes on the market and years of pent up demand have been the driving forces behind the recent home price spike, according to Erik Johnson, senior U.S. economist at IHS Global Insight.

“The shortages are likely to get larger before getting smaller,” Johnson wrote in a note Tuesday. “We still expect housing to remain a key driver of growth for at least the next couple of years.”

Related: How the Fed can taper without killing housing

The recovering housing market has been a big part of the nation’s economic recovery since the Great Recession. But many fear that rising mortgage rates could put a damper on that growth.

While some cheer the Fed stepping back from its unusual bond purchases amid fears the buying will spark inflation, others worry that it may be too soon.

*Information gathered from CNNmoney. Click here for the full article.